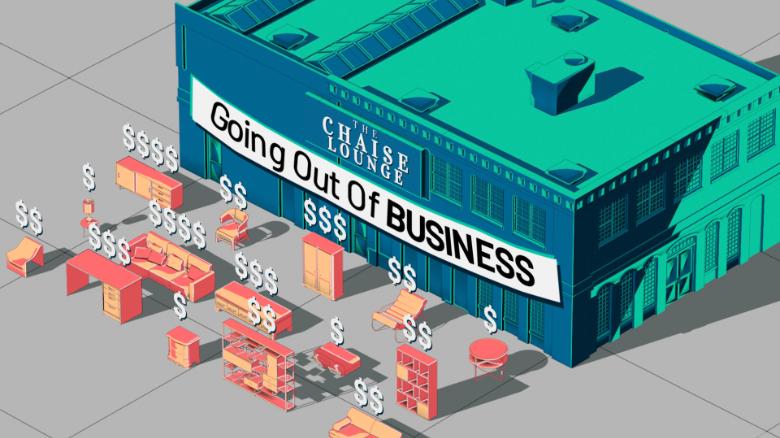 This could be the next major retailer facing bankruptcy

With more than 10 million men out of work and millions more working from home, perhaps indefinitely, this is not the best time to be selling men's dress clothes.

That's why Tailored Brands (TLRD), which owns the Men's Wearhouse, Jos. A. Bank and K&G brands, could be the next major American retailer to file for bankruptcy.

"The company has had bankruptcy advisers for a couple of months now. It's exploring all of its options and it's not a 100% that they're filing, but the odds are pretty high," said Reshmi Basu, an expert in retail bankruptcies and an analyst with Debtwire, which tracks distressed companies. "There is not going to be as much demand given the work from home environment."

A number of national retailers already have filed for bankruptcy during the pandemic, including J.Crew, Neiman Marcus and JCPenney. The clothing sector of retail has been particularly hard hit by the crisis as consumer demand for new clothes has fallen sharply. Gap (GPS) reported a record $932 million loss for its first quarter.

Other companies facing the risk of bankruptcy include Ascena Retail Group (ASNA), owner of clothing chains Lane Bryant, Justice, Ann Taylor and Dress Barn, which recently warned there is "substantial doubt" about its ability to remain in business.

Tailored Brands disclosed it is at risk of bankruptcy or even shutting down operations because of the Covid-19 crisis in a filing Wednesday evening.

"If the effects of the Covid-19 pandemic are protracted and we are unable to increase liquidity and/or effectively address our debt position, we may be forced to scale back or terminate operations and/or seek protection under applicable bankruptcy laws," the filing said. The company said it had no comment beyond the filing.

The company suspended rent payments for April and May when most of its locations were shut. It said it has been able to negotiate rent deferrals for a significant number of its stores, with repayment at later dates, beginning at the end of 2020 into 2021. It also furloughed or laid off 95% of its 19,000 employees.

But things have not gone well at the 44% of Tailored Brands stores that reopened in early May. For the week ended June 5, sales at locations open for at least one week fell 65% at its Men's Wearhouse and were down 78% at Jos. A. Bank and 40% at K&G.

Sales declined 60% in its fiscal first quarter, which ended May 2. All of its stores were closed for about half the quarter, and its online operations halted for two weeks in March. But Tailored Brands has delayed reporting its complete results -- the Securities and Exchange Commission allows companies to postpone reporting during the pandemic.

One reason for the delay is that it is weighing how large a charge it must take to write down the value of various assets, including the goodwill it carries on its books -- a measure of the value of a company's brands and reputation. The charge will be purely an accounting move that involves no cash, but it could raise the cost of borrowing money the company needs to get through the crisis.

Tailored Brands had $201 million in unrestricted cash on hand as of June 5, but that was primarily because it drew down $310 million on existing credit lines during the first quarter. That left it with only $89 million of borrowing available under those lines.

The company has about 1,400 stores in the United States and Canada, with about half under the Men's Wearhouse name. It will probably have to close a significant percentage of them whatever happens with its reorganization efforts, said Basu.

"This is the company that has the legs it needs to possibly turn things around," she said. "But consumers' tastes and demand are going to change. They're going to emerge from bankruptcy with a much smaller footprint."